Recently, I've started working on a new conceptual series. Between being a new mom and shooting paying gigs, it has been really hard to find the time and energy to even consider starting a new series.  Over the past year, this concept has haunted me to the point of keeping me up at night, thinking about locations, costuming, models, etc. The series will be called "Mythos" and is based on mythology (Grecian, mostly, but I am entertaining the idea of other cultures).

I became a serious mythology nerd in the 5th grade, when mythology was first introduced into my curriculum. We really only touched on Grecian mythology and, even then, only the Olympians. Over the years, I spent many hours scouring the internet and reading books (fiction and nonfiction) on mythological subjects. I literally can (and have) spent hours on Wikipedia reading page after page on different deities.

This past weekend, I went out to Red Bud Isle to experiment the technique I had decided to use for this series. I shot a few self portraits, thinking that at some point in the series I would like to insert myself as a primordial deity.  Below is a photo that I had, at first, considered a failed (yet, somewhat interesting) result. 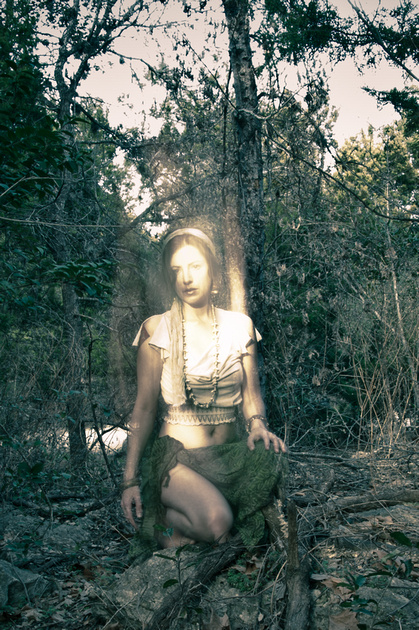 After receiving a lot of positive feedback, I decided to put the photo into the series. Normally, I wouldn't reveal a photo until the series is finished. However, since I already posted it on Facebook, I decided that it would make a fitting sneak peak. I have decided to title this photo something like "Orpheus's Last Glimpse".

Here is a little backstory (for those who are not myth-aficionados):

Orpheus and Eurydice (whom the subject represents) are in love. Eurydice dies and Orpheus is so distraught, he travels into the Underworld to find her and bring her back into the land of the living. He eventually makes his way to Hades, lord of the Underworld, and convinces him to let him take Eurydice. Hades agrees under the proviso that Orpheus may not look upon her until they have crossed back through completely, lest she be returned to the Underworld for all time. The entire journey Orpheus refrains from looking at his love. So eager is he to see her finally upon reaching the land of the living, that once out of the Underworld, he turns to see Eurydice. However, his impatience costs him his love, as she still had a foot in the Underworld when he laid eyes on her and she is forced to descend into death once again.